Last week kicked off my son’s flag football season, and as I was sitting watching his out-of-shape-ten-year-old legs run as fast as he could, I started to notice something. Every time a teammate threw the football to him; he would stop and wait and anticipate that someone was waiting to snag the flag from his body. I’m telling you even if no one was within a hundred yards of him..he stopped and waited. Because of what he thought was the inevitable, he let the fear freeze him in his tracks; instead of running to reach the goal. 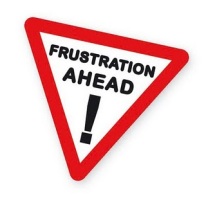 As I thought about this scene a few days later, I couldn’t help but think….. How often do I stop short of reaching my goals, sitting there just waiting for the defeat that I think is sure to come.

For me, this might look like stopping short of receiving my blessing or breakthrough. An example would be my desire to lose 10 or 15 pounds. My thought process would be. “Well, I tried to eat healthily and exercise for a week and not 1 pound has moved from my body.” And guess what? I quit and stop there in my tracks.

Who knows, I could have been one glorious step away from having that long awaited desire fulfilled.

You see, It’s easy to get stuck in the rut of weariness of the same old mundane mess. Daring not to step out in faith because the routine seems all too familiar.

The Israelites are a perfect example. They were wondering around in the desert eating the same old food each day while walking to what seemed like nowhere. The routine was getting old:

“Now, when the people complained, it displeased the Lord; for the Lord heard it, and His anger was aroused. So the fire of the Lord burned among them and consumed some in the outskirts of the camp. The people cried out to Moses, and when Moses prayed to the Lord, the fire was quenched.” Numbers 11:1-2

It had only been three days from the Exodus from Egypt. I mean they were tired, thirsty, and sick of eating the manna every day.

They were giving up too soon. Stopping short of the victory that was ahead of them. How often do we find ourselves right there in the same mindset of the Wilderness Wonderers?

Funny thing – I’m beginning to learn more and more that when I persevere and get where God has purposed me to be; it ends of being everything I wanted along. I’ve seen this happen in my life time and time again.

My friends, listen we have a High Priest who synthesizes with our weakness (Heb 4). He knew we couldn’t live this life on our own. Praise God! We don’t have to live apart from His power. We get to run our race with endurance.

“Not that I have already attained, or am already perfected; but I press on, that I may lay hold of that which Christ Jesus has also laid hold of me.” Phil. 3:12

Linked up with Chasingcommunity

2 thoughts on “Don’t Stop Short of Your Victory”